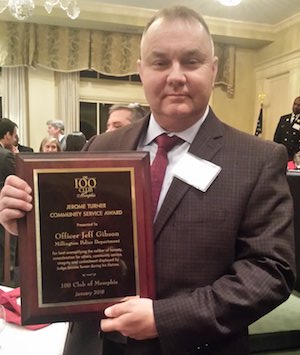 Officer Jeff Gibson has been with the Millington Police Department for 9 years. He is the Director of the Trojan Youth sports Association in Millington, which serves over 300 youth. He has also assumed the role of coach, counselor, friend and sometimes father. Since taking over the Director position at Trojan Youth Sports Association in May 2017, it is estimated that Officer Gibson has put in over 400 hours of volunteer time for meetings, practice, fundraising, transporting children, etc., He, along with some of the coaches, stops by the schools each week to check on their kids behavior and grades. Officer Gibson, reach out to the School board, Board of Alderman, local business owners and individual citizens seeking donations and support for the Trajan youth sports program. If he doesn’t get the donations needed, he will use his own funds to make sure each child gets the opportunity to participate. As a community leader, Officer Gibson’s dedication, leadership, and extra effort proved invaluable to the program’s mission to foster athletic talents of young men and women, boys and girls, and deter them from drugs, gang involvement, domestic violence and crime. Officer Gibson is using youth sports to help raise some of our most vulnerable children in our community with the hope they become productive adults.